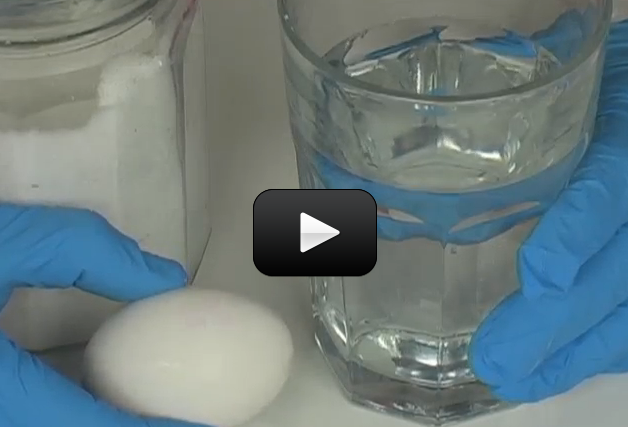 Did you know that most people can’t crack an egg with only one hand without whacking it on something? The shell of an egg is quite strong! Try this over a sink and see if you can figure out the secret to cracking an egg in the palm of your hand…(Hint: the answer is below the video – check it out after you’ve tried it first!)

How can you tell if an egg is cooked or raw? Simply spin it on the counter and you’ll get a quick physics lesson in inertia…although you might not know it. A raw egg is all sloshy inside, and will spin slow and wobbly. A cooked egg is all one solid chunk, so it spins quickly. Remember the Chicken and the Clam experiment?

Download Student Worksheet & Exercises
This experiment is all about density. Density is basically how tightly packed atoms are. Mathematically, density is mass divided by volume. In other words, it is how heavy something is, divided by how much space it takes up. If you think about atoms as marbles (which we know they’re not from the last lessons but it’s a useful model), then something is more dense if its marbles are jammed close together.

For example, take a golf ball and a ping pong ball. Both are about the same size or, in other words, take up the same volume. However, one is much heavier, has more mass, than the other. The golf ball has its atoms much more closely packed together than the ping pong ball and as such the golf ball is denser.

Back to the experiment – have you ever noticed you how float a lot easier in the ocean than the lake? If so, then you already know how salt can affect the density of the water. Saltwater is more dense that regular water, and your body tissues contain water (among other things).

Did you know that thinner people are more dense than heavier people? For example, championship swimmers will sink and have to work harder to stay afloat, but the couch potato next door will float more easily in the water.
[/am4show]