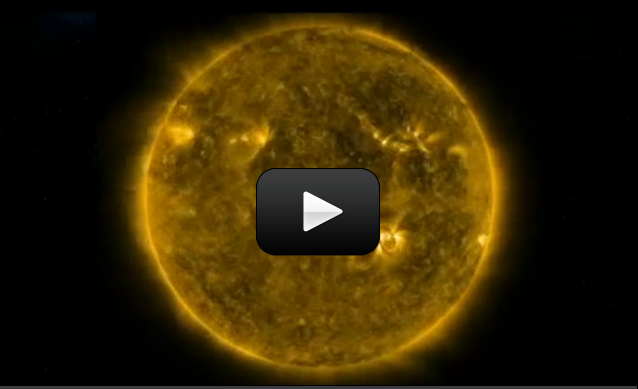 Molecules are vibrating back and forth at fairly high rates of speed, creating waves. Energy moves from place to place by waves. Sound energy moves by longitudinal waves (the waves that are like a slinky). The molecules vibrate back and forth, crashing into the molecules next to them, causing them to vibrate, and so on and so forth. All sounds come from vibrations.

The Sun is like the biggest musical instrument you’ve ever seen. A piano has 88 keys, which means you can play 88 different musical notes. The Sun has 10 million.

To play a guitar, you pluck one of the six strings. To play the piano, you hit a key and sound comes out. To play the flute, you blow across a hole. Drums require smacking things together. So how do you play the Sun?

Molecules are vibrating back and forth at fairly high rates of speed, creating waves. Energy moves from place to place by waves. Sound energy moves by longitudinal waves (the waves that are like a slinky). The molecules vibrate back and forth, crashing into the molecules next to them, causing them to vibrate, and so on and so forth. All sounds come from vibrations.

Waves are the way energy moves from place to place. Sound moves from a mouth to an ear by waves. Light moves from a light bulb to a book page to your eyes by waves. Waves are everywhere. As you sit there reading this, you are surrounded by radio waves, television waves, cell phone waves, light waves, sound waves and more. (If you happen to be reading this in a boat or a bathtub, you’re surrounded by water waves as well.) There are waves everywhere!

If you’ve ever seen a crowd of people do the “wave” in the stands of a sporting event you may have noticed that the people only “vibrated” up and down. They did not move along the wave. The wave, however, moved through the stands.

Another example would be a duck floating on a wavy lake. The duck is moving up and down (vibrating) just like the water particles but he is not moving with the waves. The waves move, but the particles don’t. When I talk to you, the vibrating air molecules that made the sound in my mouth do not travel across the room into your ears. (Which is especially handy if I’ve just eaten an onion sandwich!) The energy from my mouth is moved, by waves, across the room.

Convection starts the waves moving. You’ve seen convection when a hot pot of water bubbles up. You can even hear it when it starts to boil if you listen carefully. Just below the surface of the Sun, the energy that started deep in the core has bubbled up to the surface to make gigantic bubbles emerge that are bigger than the state of Alaska. It’s also a noisy process, and the sound waves stay trapped beneath the surface, making waves appear on the surface of the Sun. This makes the Sun’s surface look like it’s moving up and down.

Scientists use special cameras to watch the surface of the Sun wiggle and move, and they look for patterns so they can determine what’s going on down inside the Sun. Since the sound is inside the Sun under the part we can see, we use sound to discover what’s inside the Sun.

Have you ever heard the Sun? The video is an actual recording of the song of the Sun.

If you’ve ever been inside an unfurnished room, you’ve heard echoes indoors. Sound bounces all around the room, just like it does inside the surface of the Sun.

Can sound waves travel through space? No. Sound requires a medium to travel through, since it travels by vibrating molecules, and there aren’t enough molecules in space to do this with (there are a couple random ones floating around here and there, but way too far apart to be useful for sound waves).

If you have a slinky, take it out and stretch it out to its full length on the table or the ground, asking someone to help you hold one end. Now move the slinky quickly to the left and back again, and watch the wave travel down the length and return. Now move your end quickly up and then back down the table, making a longitudinal wave. When this wave finishes, take your end and shove it quickly toward your helper, then pull back again to make a compression wave. Point out to the student how when the wave returns, it’s an echo. That’s what happens inside the Sun when the sound waves hit the surface of the Sun. They don’t go through the surface, but get trapped beneath it as they echo off the inside surface of the Sun.