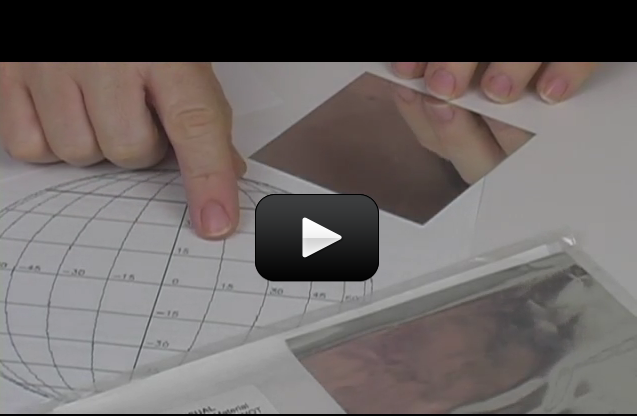 You are going to start observing the Sun and tracking sunspots across the Sun using one of two different kinds of viewers so you can figure out how fast the Sun rotates. Sunspots are dark, cool areas with highly active magnetic fields on the Sun’s surface that last from hours to months. They are dark because they aren’t as bright as the areas around them, and they extend down into the Sun as well as up into the magnetic loops.

We’re going to learn two different ways to view the Sun. First is the pinhole projector and the second is using a special film called a Baader filter. The quickest and simplest way to do this is to build a super-easy pinhole camera that projects an image of the Sun onto an index card for you to view.

If the Sun is not available, you can use images from a satellite that’s pointed right at the Sun while orbiting around the Earth called “SOHO.” SOHO gets clear, unobstructed views of the Sun 24 hours a day, since it’s above the atmosphere of the Earth. Download the very latest image of the Sun from NASA’s SOHO page (choose the SDO/HMI Continuum filter for the best sunspot visibility) and hand them out to the students to track the sunspots.

The Sun rotates differentially, since it’s not solid but rather a ball of hot gas and plasma. The equator rotates faster than the poles, and in one of the experiments in this section, you’ll actually get to measure the Sun’s rotation. This differential rotation causes the magnetic fields to twist and stretch. The Sun has two magnetic poles (north and south) that swap every 11 years as the magnetic fields reach their breaking point, like a spinning top that’s getting tangled up in its own string. When they flip, it’s called “solar maximum,” and you’ll find the most sunspots dotting the Sun at this time.

You know you’re not supposed to look at the Sun, so how can you study it safely? I’m going to show you how to observe the Sun safely using a very inexpensive filter. I actually keep one of these in the glove box of my car so I can keep track of certain interesting sunspots during the week!

The visible surface of the Sun is called the photosphere, and is made mostly of plasma (electrified gas) that bubbles up hot and cold regions of gas. When an area cools down, it becomes darker (called sunspots). Solar flares (massive explosions on the surface), sunspots, and loops are all related the Sun’s magnetic field. While scientists are still trying to figure this stuff out, here’s the latest of what they do know…

The Sun is a large ball of really hot gas – which means there are lots of naked charged particles zipping around. And the Sun also rotates, but the poles and the equator move and different speeds (don’t forget – it’s not a solid ball but more like a cloud of gas). When charged particles move, they make magnetic fields (that’s one of the basic laws of physics). And the different rotation rates allow the magnetic fields to “wind up” and cause massive magnetic loops to eject from the surface, growing stronger and stronger until they wind up flipping the north and south poles of the Sun (called ‘solar maximum’). The poles flip every 11 years.

The Sun rotates, but because it’s not a solid body but a big ball of gas, different parts of the Sun rotate at different speeds. The equator (once every 27 days) spins faster than the poles (once every 31 days). Sunspots are a great way to estimate the rotation speed.

Sunspots usually appear in groups and can grow to several times the size of the Earth. Galileo was the first to record solar activity in 1613, and was amazed how spotty the Sun appeared when he looked at the projected image on his table.

There have been several satellites especially created to observe the Sun, including Ulysses (launched 1990, studied solar wind and magnetic fields at the poles), Yohkoh (1991-2001, studied X-rays and gamma radiation from solar flares), SOHO (launched 1995, studies interior and surface), and TRACE (launched 1998, studies the corona and magnetic field). And as of August 2017, Astronomers have figured out that the surface of the sun rotates slower than its core (by about four times as much!) by studying surface acoustic waves in the sun’s atmosphere.