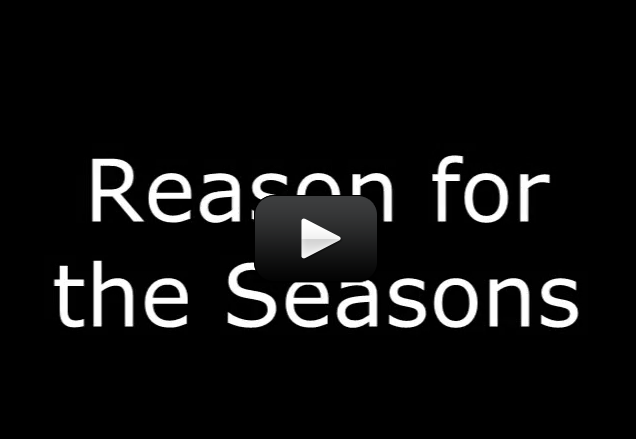 One common misconception is that the seasons are caused by how close the Earth is to the Sun. Today you get to do an experiment that shows how seasons are affected by axis tilt, not by distance from the Sun. And you also find out which planet doesn’t have sunlight for 42 years.

The seasons are caused by the Earth’s axis tilt of 23.4o from the ecliptic plane.

The north and south poles only experience two seasons: winter and summer. During a South Pole winter, the Sun will not rise for several months, and also the Sun does not set for several months in the summer. We go into more detail about how this works in a later lesson entitled: Star Trails and Planet Patterns.

At the equator, there’s a wet season and a dry season due to the tropical rain belt. Since the equator is always oriented at the same position to the Sun, it receives the same amount of sunlight and always feels like summer.

The changing of the seasons is caused by the angle of the Sun. For example, in June during summer solstice, the Sun is high in the sky for longer periods of time, which makes warmer temperatures for the Northern Hemisphere. During the December winter solstice, the Sun spends less time in the sky and is positioned much lower. This makes the winters colder. (Don’t forget that seasons are also affected by oceans and winds, though this is out of the scope of this particular activity.)