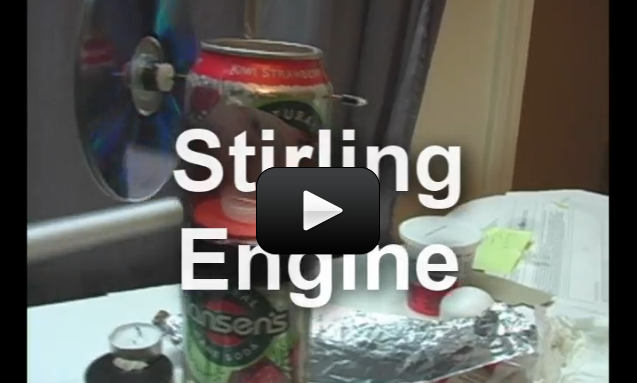 This project is for advanced students.This Stirling Engine project is a very advanced project that requires skill, patience, and troubleshooting persistence in order to work right.  Find yourself a seasoned Do-It-Yourself type of adult (someone who loves to fix things or tinker in the garage) before you start working on this project,  or you’ll go crazy with nit-picky things that will keep the engine from operating correctly.  This makes an excellent project for a weekend.

Developed in 1810s, this engine was widely used because it was quiet and could use almost anything as a heat source. This kind of heat engine squishes and expands air to do mechanical work. There’s a heat source (the candle) that adds energy to your system, and the result is your shaft spins (CD).

This experiment is great for chemistry students learning about Charles’s Law, which is also known as the Law of Volumes, which describes how gases tend to expand when they are heated and can be mathematically written like this:

where V = volume, and T = temperature. So as temperature increases, volume also increases. In the experiment you’re about to do, you will see how heating the air causes the diaphragm to expand which turns the crank.

The Stirling heat engine is very different from the engine in your car.  When Robert Stirling invented the first Stirling engine in 1816, he thought it would be much more efficient than a gasoline or diesel engine. However, these heat engines are used only where quiet engines are required, such as in submarines or in generators for sailboats.

Here’s how a Stirling engine is different from the internal-combustion engine inside your car. For example, the gases inside a Stirling engine never leave the engine because it’s an external combustion engine. This heat engine does not have exhaust valves as there are no explosions taking place, which is why Stirling engines are quieter. They use heat sources that are outside the engine, which opens up a wide range of possibilities from candles to solar energy to gasoline to the heat from your hand.

There are lots of different styles of Stirling engines. In this project, we’ll learn about the Stirling cycle and see how to build a simple heat engine out of soda cans.  The main idea behind the Stirling engine is that a certain volume of gas remains inside the engine and gets heated and cooled, causing the crankshaft to turn. The gases never leave the container (remember – no exhaust valves!), so the gas is constantly changing temperature and pressure to do useful work.  When the pressure increases, the temperature also increases. And when the temperature of the gases decreases, the pressure also goes down. (How pressure and temperature are linked together is called the “Ideal Gas Law”.)

The balloon at the top of the soda can is actually the ‘power piston’ and is sealed to the can.  It bulges up as the gas expands. The displacer is the steel wool in the engine which controls the temperature of the air and allows air to move between the heated and cooled sections of the engine.

Since the heat engine only makes power during the first part of the cycle, there’s only two ways to increase the power output: you can either increase the temperature of the gas (by using a hotter heat source), or by cooling the gases further by removing more heat (using something colder than ice).

Since the heat source is outside the cylinder, there’s a delay for the engine to respond to an increase or decrease in the heat or cooling source. If you use only water to cool your heat engine and suddenly pop an ice cube in the water, you’ll notice that it takes five to fifteen seconds to increase speed. The reason is because it takes time for the additional heat (or removal of heat by cooling) to make it through the cylinder walls and into the gas inside the engine. So Stirling engines can’t change the power output quickly. This would be a problem when getting on the freeway!

In recent years, scientists have looked to this engine again as a possibility, as gas and oil prices rise, and exhaust and pollutants are a concern for the environment. Since you can use nearly any heat source, it’s easy to pick one that has a low-fume output to power this engine. Scientists and engineers are working on a model that uses a Stirling engine in conjunction with an internal-combustion engine in a hybrid vehicle… maybe we’ll see these on the road someday!