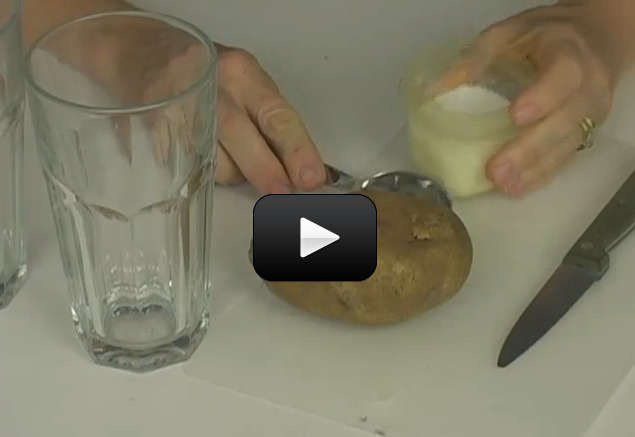 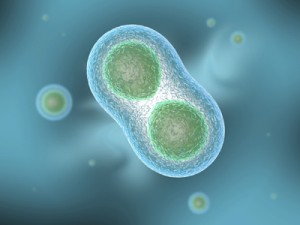 One way substances can get into a cell is called passive transport. One special kind of passive transport is osmosis, when water crosses into the cell. This experiment allows you to see the process of osmosis in action. Are you ready?

1. Cut two thin slices of potato. The pieces should be about the same thickness and be slightly flimsy.

2. Place both slices in separate glasses of water.

3. Add salt to one of the glasses.

5. Pull out the two pieces of potato and make observations in our science journal.

Did you notice that the potato slice in the fresh water became a little stiffer, while the potato in salt water became rather flimsy?  Remember that cells are made of cells and that the water in the cells flows from areas of low salt concentration to high salt concentration.  That means that if the water outside the cell is saltier than the water inside, water will move from the inside of the cell to the outside. As the water left the cell it was like letting the air out of a balloon. As more and more of the cells lost water, the slice of potato became soft and flexible.  If the water inside was saltier, the opposite happens, and some water goes into the cells, stiffening them up.

Salt starts osmosis by attracting water and causing the water to move toward and across the membrane. Remember that salt is a solute, and when water is added to a solute, it spreads out (diffuses) the concentration of salt, and that creates a chemical solution.

If the cell is placed in a higher concentration of salt (like sticking a carrot in a salt bath), the water will leave the cell, and that’s why the plant cells shrink and wilt. This is also why salt kills plants, because it takes water from the cells. This doesn’t just happen in plants, though. Animals can also get dehydrated if they drink ocean water.

Let’s do this experiment again, but use beans instead of potatoes.

1. Place enough beans and water in a glass to completely fill it

3. Leave the glass alone for several hours… even overnight!

4. While you wait, take out your science journal and write about what you expect to happen. When your experiment is ready, record what you found.

Questions to Ask:
1. The beans should begin to fall out of the water. If you look at them, you will see that they have expanded. What happened?

2. Where was the concentration of water greater – inside or outside of the beans? Explain.