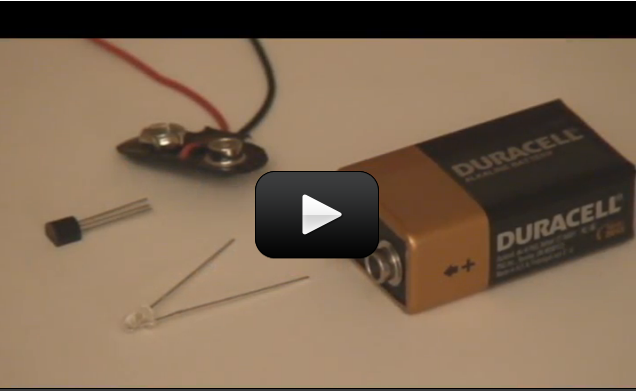 This simple FET circuit is really an electronic version of the electroscope. This “Alien Detector” is a super-sensitive static charge detector made from a few electronics parts. I originally made a few of these and placed them in soap boxes and nailed the lids shut and asked kids how they worked. (I did place a on/off switch poking through the box along with the LED so they would have ‘some’ control over the experiment.)

This detector is so sensitive that you can go around your house and find pockets of static charge… even from your own footprints! This is an advanced project for advanced students.

You will need to get:

After you’ve made your charge detector, turn it on and comb your hair, holding the charge detector near your head and then the comb. You’ll notice that the comb makes the LED turn off, and your head (in certain spots) makes the LED go on. So it’s a positive charge static detector… this is important, because now you know when the LED is off, the space you’re detecting is negatively charged, and when it’s lit up, you’re in a pocket of positively charged particles. How far from the comb does your detector need to be to detect the charge? Does it matter how humid it is?

You can take your detector outdoors, away from any standing objects like trees, buildings, and people, and hold it high in the air. What does the LED look like? What happens when you lower the detector closer to the ground? Raise it back up again to get a second reading… did you find that the earth is negative, and the sky is more positive?

You can increase the antenna sensitivity by dangling an extra wire (like an alligator clip lead) to the end of the antenna. Because thunderstorms are moving electrical charges around (negative charges downwards and positive charges upwards), the earth is electrified negatively everywhere. During a thunderstorm, the friction caused by the moving water molecules is what causes lightning to strike! (But don’t test your ideas outside in the wide open while lightening is striking!)