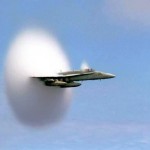 Sound can change according to the speed at which it travels. Another word for sound speed is pitch. When the sound speed slows, the pitch lowers. With clarinet reeds, it’s high. Guitar strings can do both, as they are adjustable. If you look carefully, you can actually see the low pitch strings vibrate back and forth, but the high pitch strings move so quickly it’s hard to see. But you can detect the effects of both with your ears.

The range of your ears is about 20 – 20,000 Hz (cycles per second). Bats and dogs can hear a lot higher than we can. The image (right) is a real picture of an aircraft as it breaks the sound barrier – meaning that the aircraft is passing the speed that sounds travels at (about 700 mph). The white cloud you see in the photo is related to the shock waves that are forming around the craft as it moves into supersonic speeds. You can think of a shock wave as big pressure front, which creates clouds. In this photo, the pressure from the shock waves is condensing the water vapor in the air.

There are lots of things on earth that break the sound barrier – bullets and bullwhips, for example. The loud crack from a whip is the tip zipping faster than the speed of sound. 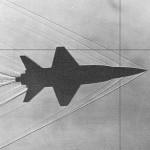 So why do we hear a boom at all? Sonic booms are created by air pressure (think of how the water collects at the bow of a boat as it travels through the water). The vehicle pushes air molecules aside in such a way they are compressed to the point where shock waves are formed. These shock waves form two cones, at the nose and tail of the plane. The shock waves move outward and rearward in all directions and usually extend to the ground.

As the shock cones spread across the landscape along the flightpath, they create a continuous sonic boom. The sharp release of pressure, after the buildup by the shock wave, is heard as the sonic boom.

How to Make an Air Horn

Let’s learn how to make loud sonic waves… by making an air horn. Your air horn is a loud example of how sound waves travel through the air. To make an air horn, poke a hole large enough to insert a straw into the bottom end of a black Kodak film canister. (We used the pointy tip of a wooden skewer, but a drill can work also.) Before you insert the straw, poke a second hole in the side of the canister, about halfway up the side.

Drape the balloon sheet over the open end of the film canister and snap the lid on top, making sure there’s a good seal (meaning that the balloon is stretched over the entire opening – no gaps). Insert the straw through the bottom end, and blow through the middle hole (in the side of the canister).

You’ll need to play with this a bit to get it right, but it’s worth it! The straw needs to *just* touch the balloon surface inside the canister and at the right angle, so take a deep breath and gently wiggle the straw around until you get a BIG sound. If you’re good enough, you should be able to get two or three harmonics!

Troubleshooting: Instead of a rubber band vibrating to make sound, a rubber sheet (in the form of a cut-up balloon) vibrates, and the vibration (sound) shoots out the straw. This is one of the pickiest experiments – meaning that it will take practice for your child to make a sound using this device. The straw needs to barely touch the inside surface of the balloon at just the right angle in order for the balloon to vibrate. Make sure you’re blowing through the hole in the side, not through the straw (although you will be able to make sounds out of both attempts).

Here’s a quick video where you can hear the small sonic boom from a bull whip:

Since most of us don’t have bull whips, might I recommend a twisted wet towel? Just be sure to practice on a fence post, NOT a person!