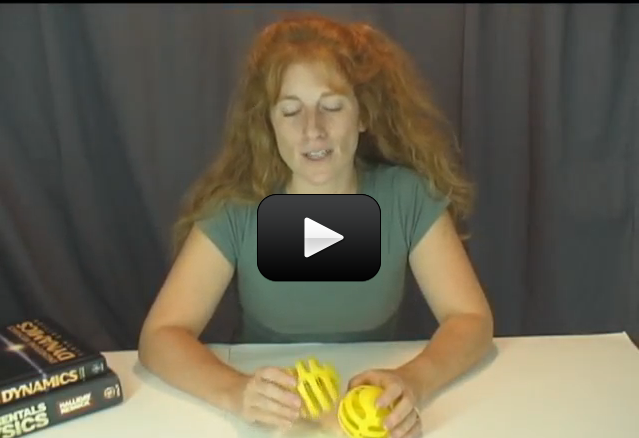 If I toss a ball horizontally at the exact same instant that I drop another one from my other hand, which one reaches the ground first? For this experiment, you need: [am4show have=’p8;p9;p11;p38;p72;p92;’ guest_error=’Guest error message’ user_error=’User error message’ ]

Download Student Worksheet & Exercises
1. Place one of the rulers flat so that it is diagonal across the edge of a table with half the ruler on the table and half sticking off.

3. Put your finger right in the middle of the ruler on the table so that you are holding it in such a way that it can spin a bit under your finger. Now with the other ruler you are going to smack the end of the first ruler so that the first ruler pushes the coin off the desk and the coin that’s resting on the ruler falls to the ground.

4. Now, before you smack the ruler, make a prediction. Will the coin that falls straight down or the coin that is flying forward hit the ground first?

5. Try it. Do the test and look and listen carefully to what happens. It’s almost better to use your ears here than your eyes. Do it a couple of times.

Are you surprised by what you see and/or hear? Most people are. It’s not what you would expect.

The coins hit the ground at the SAME time. Is that odd or what?

Did you read the first sentence at the top of this lab? What do you think will happen?

The balls will hit the ground at the exact SAME time.

Gravity doesn’t care if something is moving horizontally or not. Everything falls toward the center of the Earth at the same rate.

Let me give you a better example: A bullet fired parallel to the ground from a gun and a bullet dropped from the same height at the same time will both hit the ground at the same time. Even though the one fired lands a mile away! It seems incredible, but it’s true.

Gravity doesn’t care what size something is or whether or not it is moving, Gravity treats all things equally and accelerates them the same.

Weight is nothing more than a measure of how much gravity is pulling on you. This is why you can be “weightless” on a scale in space. You are still made of stuff, but there’s a balance of the gravity that is pulling on you and the outward force due to the acceleration since you’re moving in a circle (which you do in order to remain in orbit), so it feels like you have no weight.

So what’s the measurement for how much stuff you’re made of? Mass. Mass is basically a weightless measure of how much matter makes you, you. A hamster is made of a fairly small amount of stuff so she has a small mass. I am made of more stuff, so my mass is greater than the hamster’s. Your house is made of even more stuff so its mass is greater still.

So, here’s a question. If you are “weightless” in space, do you still have mass? Yes, the amount of stuff you’re made of is the same on Earth as it is in your space ship. Mass does not change but since weight is a measure for how much gravity is pulling on you, weight will change.

Did you notice that I put weightless in quotation marks? Wonder why?

Weightlessness is a myth! Believe it or not, one is never weightless. A person can be pretty close to weightless in very deep space but the astronauts in a space ship actually do have a bit of weight.

Think about it for a second. If a space ship is orbiting the Earth what is it doing? It’s constantly falling! If it wasn’t moving forward at 10’s of thousands of miles an hour it would hit the Earth. It’s moving fast enough to fall around the curvature of the Earth as it falls but, indeed, it’s falling as the Earth’s gravity is pulling it to us.

The rest of this experiment is for advanced students…[/am4show]

Either now, or at some point in the future you may ask yourself this question, “How can gravity pull harder (put more force on some things, like bowling balls) and yet accelerate all things equally?” When we get into Newton’s laws in a few lessons you’ll realize that doesn’t make any sense at all. More force equals more acceleration is basically Newton’s Second law.

Well, I don’t want to take too much time here since this is a little deeper then we need to go but I do feel some explanation is in order to avoid future confusion. The explanation for this is inertia. When we get to Newton’s First law we will discuss inertia. Inertia is basically how much force is needed to get something to move or stop moving.

Gravity had to be one of the first scientific discoveries. Whoever the first guy was to drop a rock on his foot, probably realized that things fall down! However, even though we have known about gravity for many many years, it still remains one of the most elusive mysteries of science. At this point, nobody knows what makes things move towards a body of mass.

Why did the rock drop towards the Earth and on that guy’s foot? We still don’t know. We know that it does, but we don’t know what causes a gravitational attraction between objects. Gravity is also a very weak force. Compared to magnetic forces and electrostatic forces, the gravitational force is extremely weak. How come? No one knows. A large amount of amazing brain power is being used to discover these mysteries of gravity. Maybe it will be you who figures this out!