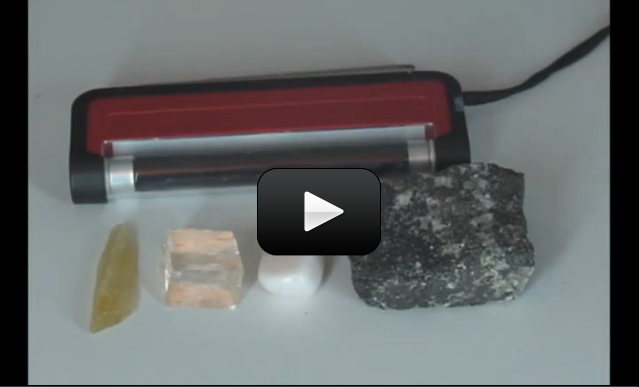 Ever notice how BRIGHT your white t-shirt looks in direct sun? That’s because mom washed with fluorescent laundry soap (no kidding!). The soap manufacturers put in dyes that glow white under a UV light, which make your clothes appear whiter than they really are.

Since light is a form of energy, in order for things to glow in the dark, you have to add energy first. So where does the energy come from? There are are few different ways to do this:

Light bulbs use incandescence, meaning that the tungsten wire inside a light bulb gets so hot that it gives of light. Unfortunately, bulbs also give off a lot of heat, too. Incandescence happens when your electric stove glows cherry red-hot. Our sun gives off energy through incandescence also – a lot of it.

On the other end of things, cold light refers to the light from a glow stick, called luminescence. A chemical reaction (chemiluminescence) starts between two liquids, and the energy is released in the form of light. On the atomic scale, the energy from the reaction bumps the electron to a higher shell, and when it relaxes back down it emits a photon of light.

Phosphorescence light is the ‘glow-in-the-dark’ kind you have to ‘charge up’ with a light source. This delayed afterglow happens because the electron gets stuck in a higher energy state. Lots of toys and stick-on stars are coated with phosphorescent paints.

Triboluminescence is the spark you see when you smack two quartz crystals together in the dark. Other minerals spark when struck together, but you don’t have to be a rock hound to see this one in action – just take a Wint-O-Green lifesaver in a dark closet with a mirror and you’ll get your own spark show. The spark is basically light from friction.

Fluorescence is what you see on those dark amusement-park rides that have UV lights all around to make objects glow. The object (like a rock) will absorb the UV light and remit a completely different color. The light strikes the electron and bumps it up a level, and when the electron relaxed back down, emits a photon.

Whew! There’s a lot to know about glow in the dark stuff, isn’t there? Let’s pull all this together and go on a Treasure Hunt. This hunt is best done just before bed, when it’s already dark outside. All you need is 20 minutes and a UV black light. Ready?

Here’s what you do: Shut off all the lights in the house and go around armed with your UV light, finding things that glow both inside and outside the house. I’ve found some surprises, including a batch of screaming yellow masking tape, eye-popping orange near the microwave (someone’s spillover from lunch?), and garishly green rocks just outside. Our teeth, laundry soap, and sneakers were way fun, too! What fluoresces in your house? Have fun!

What kind of stuff glows under a black light?

Loads of stuff! There are a bunch of everyday things that fluoresce (glow) when under a black light. Note – black lights emit UV light, some of which you can’t see (just like you can’t see infrared – the beam emitted from the remote control to the TV). By the way, that’s why “black lights” were named as such. The reason stuff glows is that fluorescent objects absorb the UV light and then spit it back almost instantaneously. Some of that energy gets lost during that process, and that changes the wavelength of the light, which makes this light visible and causes the material to appear to ‘glow’.

Here are some things that glow: white paper (although paper made pre-1950 doesn’t, which is how investigators tell the difference between originals and fakes), club soda or tonic water (it’s the quinine that glows blue), body fluids (yes, blood, urine, and more are all fluorescent), Vitamins (Vitamin A, B, B-12 (crush and dissolve in vinegar first), thiamine, niacin, and riboflavin are strongly fluorescent), chlorophyll (grind spinach in a small amount of alcohol (vodka) and pour it through a coffee filter to get the extract (keep the solids in the filter, not the liquid)), antifreeze, laundry detergents, tooth whiteners, postage stamps, driver’s license, jellyfish, and certain rocks (fluorite, calcite, gypsum, ruby, talc, opal, agate, quartz, amber) and the Hope Diamond (which is blue in regular light, but glows red).

When you purchase your UV fluorescent “black lights”, be sure to get the LONG WAVE version (short wave UV is the kind that causes permanent damage to living things – that’s how they kill the bacteria in water), and it appears that UV fluorescent lamps work better than the UV LEDs currently on the market, usually sold as “UV Flashlights”. We tried both, and the stuff shone brighter with the fluorescent lamps.